Until recently ginger redhead men and women didn’t have a solution for home laser hair removal. All the available systems were not approved for red hair removal. The lack of dark pigment in the hair made the home devices useless for all gingers out there.

The non laser (or IPL) solutions are a mess and most of them last only for a short period of time. Shaving and plucking for a week, waxing and creams last for two-three weeks. The option of Electrolysis is far too expensive for a full body treatment. So that is about what ‘red head community’ had to settle with. If you are a ginger, you may have read some posts in FB or forums complaining about this situation.

Why IPL or Laser Are Not Safe For Gingers

The problem with ginger hair is that it does not have enough pigment for the laser or IPL light energy to catch upon. The light which those systems produce needs some dark pigment to attract it. Once the dark pigment attracts the light energy the hair heats and gets burned by the intense light flash pulse of light.

For this reason no laser or IPL device distributed for home use, was allowed for red hair removal. The laser or IPL energy would be absorbed by the skin and not by the hair pigment and may cause skin burns.

ELOS Technology To The Ginger’s Rescue 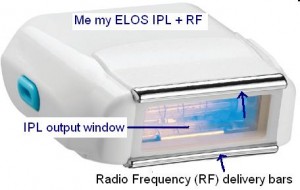 A new hair removal technology called ELOS (Electro-Optical Synergy) which was invented in Israel by Syneron labs combines Light energy and Radio Frequency. The light energy flash cause the hair to slightly warm up, but not as intense as to cause a skin burn.

The flash is followed by a transmission of Radio waves from two bi-polar bars placed beside the IPL lamp. The RF (radio frequency) is attracted to the preheated hair follicle, and heats the hair shaft even more. The second RF heat is not “optical” so there is no danger to the skin due to lack of pigment.

Because of the RF (radio wave) the ELOS was approved by the FDA to treat all hair colors! This means that for the first time ever gingers can do their very own ‘laser hair removal’ at home, in safety.

Since the red hair doesn’t have enough pigment to attract the light, ELOS combination of light and RF can be more effective than other methods. Redheads may need to do more treatments and more sessions to get the results they want. Removing red hairs is challenging for the ELOS as well.

Unlike other systems which IPL lamp has a limited capacity of flashes, the latest ELOS device has 120,000 flashes installed (compared to 1500 flashes in other devices).

Amazon has 2 year warranty for their ELOS systems and they ship it worldwide, check the NEW Me my ELOS device with 120,000 flashes.

No one chose to be born ginger, but redheads have their own uniqueness. The rusty red hairs, the freckles and the ‘ginger temper’ is somewhere between a myth and a fact. Being ginger once had meant being doomed for hair removal frustration, but those who wish to be smooth gingers, now have the chance to do it at home.