As you know, this website specialize in preforming comparisons to any hair removal systems available on the markets. This time we will compare the prince and princess of the home hair removals, the Silk’n SensEpil Vs Tria Laser. The TRIA laser and the Silk’n SensEpil have been for long time the only reasonable options for reducing hair growth at home.

Comparing the Silk’n SensEpil to the TRIA laser is done because they are the most popular hair removal devices bought by thousands for home use. In this comparison we will review the two technologies, the user experience and the price of the two systems. We will even let you know which of the two systems we believe will be better for your hair removal needs.

The systems use different technologies which relay on the same chemical and physics to preform the hair reduction. In short they do the same effect, they produce high energy light which heats the melanin in the hair and the heat disables the hair stem cell from further hair growth.

The TRIA is using a laser beam – The TRIA is a diode laser, which means the device will produce a thin 0.5 cm round spot size beam. The beam energy setting can be up to 24 joules per cm². The TRIA wavelength is 810nm (nano meter).

The Silk’n SensEpil is using IPL – IPL is a wide spectrum light (unlike the focused laser beam it has wavelength of 475-1200nm). The SensEpil has up to 5 joules per cm². The Silk’n manufacturer calls their IPL light HPL (Home Pulsed Light) but basically it is IPL (Intense Pulsed Light). The SensEpil spot size is 2×3 cm = 6 cm².

The main difference between the two systems can be noticed better at the home sessions. The TRIA laser has a stronger beam compared to the SensEpil, which can easily produce higher temperatures when melanin reacts with the light. But the TRIA has some drawbacks that should be acknowledged.

User safety measures – both systems have the same safety measures to protect the user from accidental mishaps. The TRIA and Silk’n SensEpil have ‘skin contact’ sensors, which will prevent an accidental pulse of light beam to be projected unless the lamp window touches the skin. Both systems have a skin tone sensor too which unlocks the systems if the device is placed over dark skin.

Though both safety measures are important they slow down the process of pulsing the light at the skin. And both systems have a rather slow repetition rate of 1 pulse every 3-4 seconds. The SensEpil has some advantage because it’s spot size is much wider and covers more skin with each pulse.

So for those with stressful lifestyles we would recommend the Silk’n SensEpil system.

The TRIA is a cordless device! So it can be used anywhere at home, even sitting in the garden or beside the pool. The SensEpil has to be connected to a power source all the time. The cordless TRIA has one problem and it is the device recharging breaks. The TRIA can emit at high levels for an 2 hours or so, but then the ‘low battery’ indication begins to flash and the system needs to be plugged for 1.5 hours till it is ready to go again.

The price of Silk’n SensEpil and TRIA Laser have been declining steeply during  the last few years. Both systems had a high marketing position and their price was nearly $1000. But the rough competition and the new brands entering the markets, have caused the list price to drop.

The Silk’n SensEpil has a higher price tag. The device it self is more expensive than the TRIA ($450 vs. $395). The disposable cartridges ($45) are good for 750 pulses only which are supposed to last one full body treatment (two legs, two arms + bikini line). Compared to having a laser hair removal at the med-spa, SensEpil is rather cheap ($45 vs. $600 per full body session), but compared to the home TRIA laser – it falls behind.

TRIA laser has a limited laser life span. The NEW TRIA laser will last 90,000 laser pulses. It might sound endless, but it is equal in skin coverage to 10 SensEpil cartridges ($450 worth). With 7-8 treatments for the first year and 2-3 maintenance sessions every year, the TRIA will last for 2 years max.

Our conclusion is that the SensEpil has more benefits than the TRIA laser. It can treat more skin with each pulse, it can complete a body session faster than the TRIA laser. It does require a higher initial investment, but the system can serve for years and still be useful, while the TRIA which costs less will be emptied within 2 years (10 full body sessions). It might not be surprising that the SensEpil has won the 2011 award for ‘Best Hair Removal System’ by the About.com readers.

(Get Your Silk’n SensEpil From Amazon.co.uk HERE) 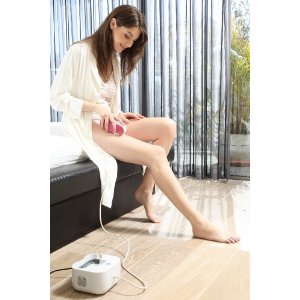 The TRIA may be a best buy, for those who need a very limited skin location hair removal solution. If you are treating your underarms and bikini line only, the TRIA can be cheaper and more comfortable to use than the SensEpil. For full body sessions our winner is the Silk’n SensEpil.

Be the first to SHARE this comparison with your friends