If you are suffering from hair thinning and hair loss you may be wondering which of the two laser hair growth helmets would be better for your needs Theradome or iRestore? There have been former comparisons but we decided to follow up today at 2017 to make sure you get the latest update.

Both the Theradome laser helmet and iRestore helmet look similar and the marketing promises are as usual very high for both of them, so it can be quite difficult to make out which may be more suitable and effective for you.

We did a comparison for you, evaluating the pros and cons of these two home laser hair growth machines.

Safety Above All – Both of the devices are FDA cleared, which means the technology which they are using was evaluated and found safe.

Both helmets have a similar safety sensor which disable the device from emitting laser if the helmet is not properly sitting on the head. This is to make sure the laser light does not harm the eyes. The laser therapy is safe and has no known side effects.

The Theradome helmet has a clear advantage here! It has 80 laser diodes installed the iRestore has only 21 lasers and 30 non-laser diodes (LEDs). With 4 times more laser diodes, the device overall treatment efficiency is greater.

iRestore helmet has more LEDs than lasers. These LEDs emit the same wavelength of red light, but its the laser which penetrates deeper to the skin and stimulates the follicles hair growth. The LEDs spread their light while the laser beams through the upper skin layer.

There is also a slight difference between the laser wavelength. The Theradome is using 678 nanometer wavelength and the iRestore is using 655 nanometer. Both are in the spectrum of Low Level Laser Therapy (LLLT). 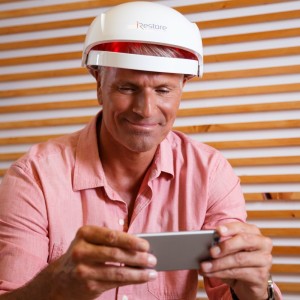 The Theradome has a great advantage on this feature also. The Theradome helmet system is portable! This means you can use it and still be free to move around the house.

The guy in the image (using iRestore) can play mobile games for 30 minutes, but if he needs to go to the kitchen for coffee, he will have to stop the treatment process and resume it when he’s back. The iRestore has a timer device, that manages the 30 minute session by announcing when the time is up. The same person with Theramdome, is free to walk and move about, with the helmet still working continuously .

Design comparison – Both of the helmets arrive in a white futuristic space like design. They have pads inside the helmet to make sure it fits well over the head.

The iRestore lights are spread more evenly on the sides part too while the Theradome lasers (see image) are placed more on the top part. For men most of the hair loss is on the top front and top back of the head. Theradome has it’s lasers where the main issue is.

Both devices when used properly by the right candidates, use a proved technology and can both show increase in hair growth, hair restoration, thicker hair showing where it was thin before.

The laser home system helmets can enhance and rejuvenate hair growth where the follicles are still functioning. The shrinking follicles get the laser energy and get energized at the cells level to reproduce thicker hairs, (like watering a plant). 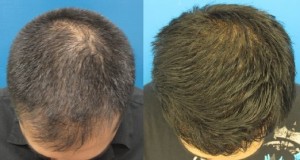 The Theradome laser system has better specs and better features! It is portable, it has 4 times more lasers installed (see Theradome before and after images on the right).

So obviously it out ranks the iRestore helmet. The only downside is that the cost of the Theradome is higher, and some people would not be able to afford it.

If you have the ability to afford it, click here to order the Theradome helmet device, it has 4 times more lasers to be stimulating your hair growth! 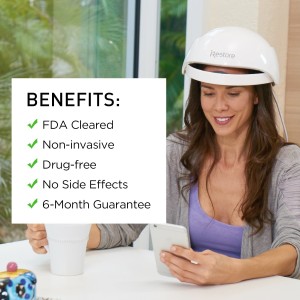 The iRestore laser hair growth device has a very unique Money Back Guarantee plan which states you use and if after six month you do not see results, can get your money back (minus handling and shipping fees).

Click here to get your iRestore hair growth laser helmet to begin restoring your hair volume and looks.

With the 6 month money back guarantee, you have very little to lose, give the iRestore a chance and see if you are satisfied with the hair restoration results.

Since you can’t know in advance if the Low Level Laser Therapy would be effective for your specific situation, the iRestore offer is very lucrative and worth a try.

The Theradome has better specs but the iRestore has a money back guarantee!

Disclaimer: The content at DangersOfLaserHairRemoval.org is provided for general information only and is not intended to be utilized as advise, diagnosis, or care. If you have questions concerning your health, seek the advise from your health care professional.
http://DangersOfLaserHairRemoval.org is a participant in the Amazon Services LLC Associates Program, an affiliate advertising program designed to provide a means for sites to earn advertising fees by advertising and linking to amazon.com/amazon.co.uk