Here you can find our comparison and recommendation when having to decide between the Tria laser vs Venus laser hair removal systems. Both the Tria laser and the Venus laser can be a suitable solution for people who seek long lasting hair reduction of unwanted hairs. Below you can see the Tria on the left and Venus system on the right. 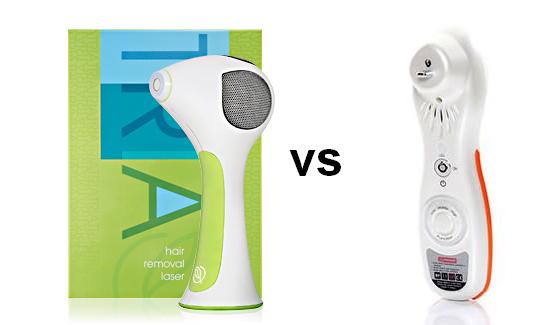 The Tria laser was the first ever laser hair removal for home use. The TRIA laser you find at online shops is the third generation of this product Tria 3.0, with upgraded features and advanced specs. The TRIA laser is a cordless system, it has FDA approval, and well known for it’s customer support. Tria laser costs $395.

Venus laser, is a rather new system in the US markets. The Venus laser is manufactured by BNB Medical which is based in South Korea. Venus laser is an upgraded laser device based on the Epila and Xemos machines, which did not succeed too much in USA. The system looks better and has more features then he former machines, and it is sold at an extremely low price of $199.

Both the Tria laser and the Venus laser use diode laser at the same wavelength. The 808nm (nano-meter) wave length is used to reach deep enough to the lower epidermis layers and destroy the hair follicle.

Treatment Convenience – The Tria is a cordless system, so it can be carried anywhere, and used even when the user sits in the back yard. The Venus is a hand held device with no base unit, it needs to be connected to an electric power source to function. Venus is a very light weight system it is easier to treat the body with it than with the Tria laser.

Downtimes During Treatments – The main cons of the Tria in this aspect, is that the Tria has long downtimes for recharging. Every hour or so, the Tria needs an hour to charge. The Venus laser CW808, requires only a short 5 minute break for cool-down every half an hour. 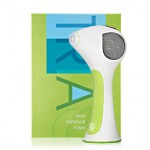 Laser Spot Size – The Tria has a laser spot size of 1 cm², which is considered ‘wide’ for at-home laser systems. The Venus CW808 Laser has a spot size of 2 mm. Small spot size has advantages when treating small areas, and contouring moles, tattoos and delicate facial parts like lips. When treating large skin areas like the legs, chest or abdominal, than the Tria has an advantage due to the larger coverage.

Laser Tip Shape – When working with a small laser spot size, the user needs to see the place treated, in order to overlap for most effective coverage. When using the Tria laser, the user can see where the next zap will be, with the Venus laser it is slightly more vague. Near the laser emission window at the Venus system there is a tiny bar, which is needs to touch the skin. The Venus user will not see the laser zapping spot but will only feel the bar touching the skin to estimate the overlapping movement needed..

Best Candidates – Both Tria laser and the Venus can treat successfully skin tones of 1-4 (fair tones) and are not recommended for dark skin treatments. Both system will not be effective for white/blond/gray hair colors. 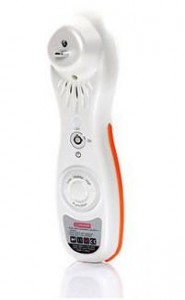 The main  advantage of the Tria vs the Venus laser is when it comes to user safety. There is no other system which is as safe as the Tria laser for home use. The Tria laser was designed to protect even the most dumb users from self injuries.

So while a Venus user can accidentally zap a beam toward the eyes, or use the Venus on dark skin (dangers of laser side effects) this is nearly impossible to do when treating with the Tria laser. The Venus has a physical key to lock it. The key is needed to open and locks the system to avoid others using it without permission (children). 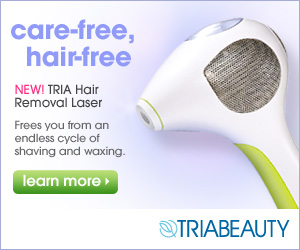 The Venus laser advantages are that it is light weight, suitable for facial use and sold at a very cheap price. But when placing Tria laser vs Venus laser, our conclusion is that the Tria laser is a superior at-home laser system for hair removal.

Though the price difference is significant, (Venus $199 and the Tria $395) the Tria has by far more advantages than the Venus for those who seek to reduce their unwanted hairs.

Tria safety precautions are priceless when thinking of laser and injuries which can accidentally happen. If you need a second laser hair removal to do fine touch ups, or need a system for facial hair removal, than the Venus laser CW808 may be the best solution, as it is light weight, precise and very cheap.

Read More On The Tria Laser and The Venus Laser:

All About The Venus Laser Hair Removal

Removing Hair From Vagina With The Tria Laser

Please share this with others, there is currently no other direct comparison of Tria laser and Venus laser published anywhere else.. help others.