Best Hair Removal For Home Use 2014

Buying a home laser hair removal device is not a simple shopping experience. There are so many systems and devices, there are so many tech stuff to try and understand, and there is the fine print and similar terms which can make any normal person feel confused.

In this article you we will try and make some sense in all these confusing terms, and share with you which is the best home hair removal system. The good news is that there is one system which is by far better than all the rest of the systems. As technology advance, we have better solutions for removing hair at home.

Now at 2014 we have reached a point that the comparison is quite easy. It is like comparing a smartphone to your old cellphone. The smartphone is superior by all parameters. So is the new technologies compared to the old technologies.

The best home hair removal system is not laser and it’s not IPL – It’s ELOS.

Laser vs IPL vs ELOS

The first technology used to remove hair was laser technology. At the early stages it sounded like science fiction.. and at the time it was. But the home laser hair removal technology have not been changed in nearly 10 years. If we take the TRIA laser for example, the device might have a different designs, and different control panel, but the basic technology with it’s cons and drawbacks has not changed.

Laser is a very slow way to remove hair at home, the light is pulsed through a very narrow tip, and can treat a less than 1/2 inch² of skin at time. With 3-4 seconds needed to reload the second pulse  the home treatments is sloooow. When each treatment needs to be carried out 4-6 times for most effective results, laser home devices are clumsy and inconvenient.

Laser energy zapping the skin is more painful than IPL pulses, the beam zapping the skin cause intense heat at the treated spot. Some people even use anesthetic creams to dull the laser treatment pain.

Then came the IPL.

The IPL technology was invented by an Israeli scientist (Dr Shimon Echouse), was a major breakthrough for home hair removal customers. The IPL works faster on a wider range of light wavelength and using lower light energy at each pulse.

The IPL hair removal technology was an immediate success! Beauty salons everywhere began treating their customers with IPL. The procedure is much faster than laser because the flash window is much wider than laser, there are less side effects as skin burns compared to laser, because of the wider spectrum wavelength, and lower light energy used.

Though the IPL was better than the laser hair removal technology for home use. It had it’s drawbacks too. The two main drawbacks were that dark skin could not be treated by laser or by IPL, the light energy would cause the skin to heat instead of the hair and cause skin burns. And the treatments with IPL were still quite slow, a full leg can take 30 minutes to cover.

Then came the ELOS.

a few years later Dr Shimon Echouse the same Israeli scientist which brought the world the IPL has improved it and developed a new technology called ELOS. Electro Optical Synergy. The idea was to overcome the drawbacks of IPL by a whole new concept of technology.

The Elos is based on a reduced IPL light energy flash, which heats the hair and is followed by a RF radio frequency wave which is attracted to the preheated hair and heats it some more. The breakthrough is that the RF is not light energy, thus it is safe for all skin tones and hair colors.

The ELOS works by gliding the device over the skin, no need to wait 3-4 seconds for energy to reload, just one constant glide over the skin, the IPL flashes every second, and the RF follows.

While the ELOS was not so familiar to the private home user it was a huge success at beauty salons and dermatological offices. It is used for numerous aesthetic procedures due to its advanced safety, the ability to treat all skin types, it’s less painful and can complete a full body in 30 minutes. 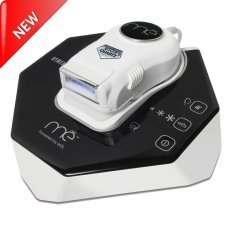 Two years ago the first home ELOS hair removal system was released. With millions of professional treatments done worldwide, the new Me my ELOS home system was a match breaker. The superior technology, safer treatments, user friendly experience made it the best kit out there.

Last year Syneron the manufacturer of Me my ELOS has released the third generation device. It has full FDA clearance to treat all skin types! It is safe for all hair colors! It is faster than IPL and laser, and is less painful too. While IPL systems have 1500-2000 flashes the new Pro Ultra system has 120,000 flashes installed in it’s lamp.

The Me my ELOS Pro Ultra device can complete a full body hair removal treatment at 30 minutes! It has add-ons and attachments which turn the device into a shaver or an epilator. It has a special add on for facial hair removal and safety goggles for eye protection.

Shop For The Pro Ultra ELOS at Amazon

Like comparing the iPhone to your old Nokia phone, the ELOS home device is by far better than any compared system.

Unlike other IPL or laser which are effective only for selected candidates skin or hair types Me my ELOS Pro Ultra is safe for all. ELOS completes each treatment faster than laser or IPL. Hair reduction results can be noticed after the second treatment. The Pro Ultra lamp carries 120,000 flashes (compared with 1500 in regular IPL systems).

There is no doubt that the Me my ELOS Pro Ultra is currently the best hair removal system you can buy for home use. It is by far better than any other device or system sold at Amazon or any other online store. The second best device would be the former Me my ELOS device, as no other hair removal technology can beat thePro-Ultra Electro Optical Synergy efficiency and pros.

Click HERE To Buy Your ME my ELOS Pro Ultra

More About Me my ELOS Pro Ultra: