TRIA laser and Avance DM9050 laser are currently two of the very few home lasers to choose from. When comparing the Tria Laser vs DM9050 Avance laser system there are significant differences worth to know, before you decide which laser hair removal to purchase.

Compare Before You Buy

There is a huge difference between the TRIA and the DM9050 when comparing their laser energy power. The DM9050 has a super-high energy level of 150 J/cm2 per second, while the TRIA has 24 J/cm2 per second. This difference means the Avance laser is able to ‘send’ more light energy, deeper into the skin layers. This light then turns to heat and allows more effective hair removal.

The Avance laser DM9050 can reach such high levels due to the fact it has a high repetition rate, it can emit the light faster than the Tria.

While the Tria laser needs 2-3 seconds between each pulse of laser, the DM9050 can emit 100% energy at lower sequence rate or 50% energy at a higher rate. This allows to treat sensitive skin with lower laser energy but with higher emission rate to compensate.

Smaller spot size is a benefit when hunting specific hairs or contouring precise areas. It is a disadvantage when large skin surface needs to be treated. The DM9050 has a small spot size, but a high repetition rate to be able to cover more skin even though the treatment spot size is small.

There is no doubt that the Tria was designed for home use. It has a nicer look and the curves to appeal the end user. The DM9050 and all Biotechnique Avance lasers, are designed as a working tool for hair clinics. The outer design is minimal, with a boring metal square box, black cord, and the simple laser pen/wand. The DM9050 laser is the first device which Biotechnique Avance distributes in two colors (cream or black).

Tria vs DM9050 User Use Experience

The Tria is a cordless laser hair removal system, which is very convenient because it frees the user to treat the skin anywhere at home or in the garden. The DM9050 can be used only when connected to a power source. But the cordless feature has a downside too, because the TRIA laser has to be recharged every 1-2 hours, which slows down the whole process of full body hair removal treatments.

The main difference in the safety precautions each system has, is based on the fact each system was designed for a different purpose. The Tria laser was designed for home personal use, and the DM Lasers where designed to be used at a hair removal center by a professional cosmetic partitioner, treating someone else.

The Tria has two main safety sensors, which make it FDA approved and a safer system for at-home hair removal.

Tria Skin Touch Sensor – Is a safety sensor which locks the system from emitting laser unless the tip is pressed against the skin. This prevents accidental laser being pulsed toward the eyes.

Tria Skin Tone Sensor –  Before each laser pulse, the Tria checks the skin tone, if the skin is too dark, the system will not operate. This protects the wrong type of candidates causing burns and scars to their skin.

The Avance DM9050 laser hair removal system, does not have any of these sensors, so the worst case scenario is that a person with dark skin (and a thick layer of topical anesthetics for laser hair removal) will cause deep skin burns and scarring, or a careless person will look down at the laser pen/wand and press the button sending 9000mW laser beam into their eyes.

Buy The Tria Laser – If you want to treat your skin and remove unwanted hair, then the Tria laser will be our recommendation. It is the most popular laser hair removal system for home use. The Tria has 5 energy levels so it can treat sensitive skin with lower energy used. The two safety sensors will protect you and your family (children) from severe laser hazards!

Thousands have used Tria to remove body hair, it is effective, and CAN reduce hair growth dramatically (for the right candidates) and it has a superb customer after-sale support. Take Action – Get Your Newest Upgraded 4X Tria NOW 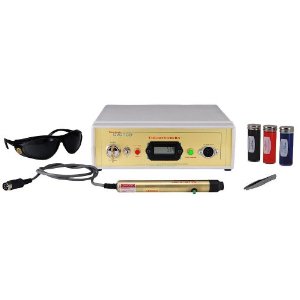 Buy The DM9050 Laser – If you are a small med-spa, beauty salon, physician office, hair removal center and are looking for a professional hair removal laser, which does not cost $1500 like the ‘heavy-duty’ laser systems, then the DM9050 Avance laser has a very high value for money.

It is long lasting system, with 5000 hours of continuous use (about 3-5 years) it can treat hundreds of people, the high repetition rate makes each treatment faster, the high energy laser will ensure better chances to destroy hair growth with each zap. The DM9050 has a digital laser counter, energy level switch, a key lock, and a light weight laser pen/wand for hours of precise laser hair removal sessions.

The DM9050 laser hair removal is a great system for a trained person who treats others. Get the DM9050 Laser Right Away For Your Business.